Canonisation of Chavara, Euphrasia to be celebrated at the Rajagiri campus in Kakkanad on November 29

Rajagiri campus in Kakkanad, Ernakulam will be the venue for common celebration by the Catholic Church in Kerala on November 29 , 2014 with a concelebrated Mass with a representative character. Plenty of Bishop's and priests participate in Holy Mass. Rajagiri campus is located in seaport - airport road between Thrippunithura and Kakkanad. Rajagiri Institutions is run by  CMI.
Posted by Engineers World at 6:00 AM No comments:

Chavara Bhavan, located in Alappuzha, is the ancestral home of the saint Kuriakose Elias Chavara. Chavara Bhavan is the shrine of Blessed Kuriakose Elias. Blessed Chavara was born on February 10, 1805, at Kainakary, Venice of the east (Alappuzha) . It is a pilgrim center for Roman Catholics in Kerala. The place is accessible  by boat from Alappuzha. Alappuzha to Chavara Bhavan (via. Kayalppuram. ) is 16 km.
Chavara Bhavan Pilgrim centre
Kainakary P.O., Alappuzha -688 501, Kerala, India
Posted by Engineers World at 11:44 PM No comments:

Ludovico de Casoria, an Italian Franciscan friar born in Casoria in 1814. After teaching Philosophy and Mathematics for 20 years, he decided to spend his life rescuing children sold as slaves in Africa.

Amatus Ronconi was a thirteenth-century Tertiary who rose to great heights of sanctity by serving God as a hermit, as a pilgrim and as a nurse. He was Born at Sldezzo, near Rimini in 1238 and died on 1306. His feast is celebrated at Rimini on May fifteenth.

Nicola Saggio (Nicola da Longobardi)was an Italian Catholic saint who was a member of the Order of Minims. Nicola Saggio was born on 6 January 1650 in Longobardi, a small town on the Tyrrhenian coast. He was beatified by the Roman Catholic Church in 1786 and will be canonized on 23 November 2014

Giovanni Antonio Farina (January 11, 1803 – March 4, 1888) was an Italian Catholic bishop known for his compassionate treatment of the poor and his enlightened views of education.
He was beatified in 2001 by Pope John Paul II and declared saint on Nov 23, 2014.
Posted by Engineers World at 11:18 PM No comments:

Syro-Malabar Church Major Archbishop Mar George Cardinal Alenchery will celebrate a thanks-giving Holy Mass in Vatican on November 24.It is expected that Pope Francis will  address and bless the delegation from India  after the mass by the Cardinal Alenchery. This mass is Catholic church in Kerala's thanks giving mass for declaring  Kuriakose Elias Chavara and  Sr Euphrasia as saints.
Posted by Engineers World at 1:05 PM No comments:

Indian Government and Kerala Government will jointly sent official delegation to Rome to attend canonisation of Fr Kuriakose Elias Chavara and  Sr Euphrasia, who will be elevated as saints at a function to be held  in Vatican on November 23. Central government delegation includes MP's while Kerala governments delegation to Vatican includes a state minister and some MLA's. Kottayam MP Jose K Mani will surely be included in delegation.
Posted by Engineers World at 12:50 PM No comments:

Congregation of Mother of Carmel (C.M.C.)

The Congregation of the Mother of Carmel (C.M.C.) is a Syro-Malabar religious institute of Discalced Carmelite Religious Sisters founded in 1866. It was the first native congregation for women in that Church. The congregation was founded by the Saint Kuriakose Elias Chavara, in collaboration with Father Leopold Beccaro, O.C.D., the Master of novices for the Discalced Carmelite friars in India on 13 February 1866 at Koonammavu in Kerala.
The congregation today is divided among 20 Provinces and six regions throughout India and Africa. They also serve in Germany, Italy and the United States.Elias Chavara, the founder of the congregation, was beatified by Pope John Paul II in 1986, in the course of his visit to India. One of the congregation's early members, Mother Euphrasia of the Sacred Heart of Jesus, was beatified by Pope Benedict XVI in 2006.

Interestingly Mother Euphrasia and Kuriakose Elias Chavara will declared as saint on same day
Posted by Engineers World at 6:00 AM No comments:

The Carmelites of Mary Immaculate (C.M.I.) are a religious institute for men in the Syro-Malabar Church found on 11 May 1831; 183 years ago. It is the first Catholic religious congregation founded in India. "I have been very zealous for the Lord, the God of hosts" is the motto of C.M.I. It was founded by Kuriakose Elias Chavara along with Thomas Palackal and  Thomas Porukara as co founders. The first monastery of CMI congregation was established on 11 May 1831 at Mannanam in Kottayam district of Kerala, India.
The congregation currently has five major seminaries for the training of its members: Dharmaram College, Bangalore, Darsana Philosophate, Wardha, Samanvaya Theologate, Bhopal, Carmel Vidya Bhavan, Pune, and CMI Vidya Bhavan, Baroda. The first seminary outside India was established in 2001 in Kenya. In 1962, when the Chanda mission territory was entrusted to the Syro-Malabar Church, it was committed to the care of the congregation. Apart from Chanda, today CMI bishops take care of the dioceses of Jagdalpur, Bijnor, Rajkot, and Adilabad. Other than Missionary works congregation have running lot of educational institution. One of the pioneering works of C.M.I is in 1844, the first printing press in the Syro-Malabar Church was started at Mannanam. Deepika, the first newspaper of Kerala, was begun at Mannanam in 1887. After running it for more than a century, it was handed over to a registered company.

Posted by Engineers World at 5:48 AM No comments:

1831, May 11  Foundation of the first Indigenous Religious Congregation for Men (CMI) and first Monastry at Mannanam.

1846  Started the first catholic printing press in Kerala
1861, June 8 Appointed as the Vicar General of the Syro-Malabar Church

1866, Feb 13 Foundation of the first Indigenous Congregation for Women (C.M.C.)

1871, January 3 The death of Bl. Chavara at Koonammavu

1889, May 24  Mortal remains were transferred to Mannanam

1980, March 15  Formal introduction of cause by the Sacred Congregation

1984, April 7 Pope John Paul II elevated him to the status of Venerable

2014, November  (declared as saint soon)
Posted by Engineers World at 5:14 AM No comments:

Blessed Kuriakose Elias, we your children bow before you, who are chosen by God to give new life to the church in Kerala. God was pleased with you for like St. Paul who fully co-operated to the will of God, lived a life from which the Grace of God was never lost in the least.
Because God as adorned your soul with lovely virtues and glorified you in heaven and made you done august deeds for the glory of God and for the salvation of souls, we offer in union with you praise and worship to God
Loving Father, like the fiery prophet St. Elias who burned with zeal for God, you spent all your life span for the salvation of souls, now in imitation of your life, obtain for us the Grace of God to live our lives pleasing in God's sight and with it now grant us the blessings we beseech ……………….. through your intercession. Amen
1 Our Father, 1 Hail Mary, 1 Glory 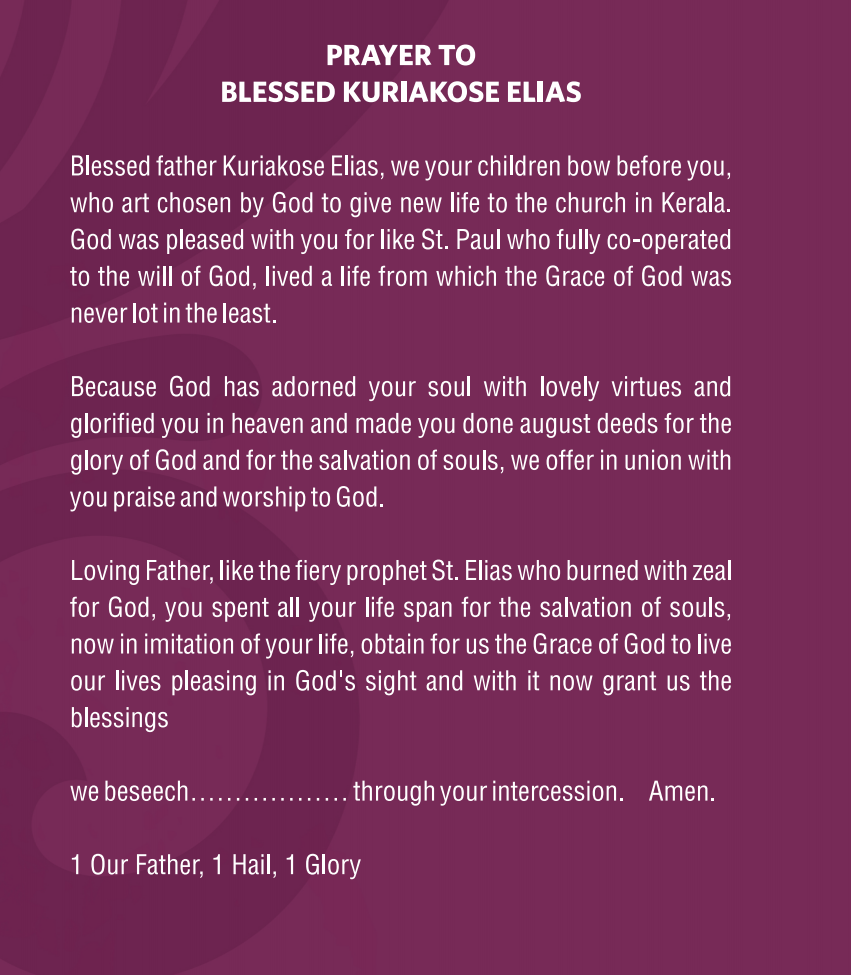 Posted by Engineers World at 4:06 AM No comments:

Malayalam Novena (prayer) to the blessed Chavara Achan is given below. Malayalam is the mother tounge of Kuriakose Elias Chavara , declared as saint in last week of November 2014.

Posted by Engineers World at 3:46 AM No comments:


The announcement of Blessed Father Chavara Kuriakose Elias, popularly called as Chavarayachan and his disciple and nun Blessed Sister Euphrasia called as 'Evuprasamma' is a twin delight for the 2000 year-old Indian Church establkished by Apostle St. Thomas and the Society founded by Chavara Kuriakose Father, the CMI....!
Kuriakose Elias Chavara is the second man  from India to be declared as saint  followed by Mumbai based St Gonsalo Garcia. Garcia who was born in 1556,desired to become a Catholic Priest, engaged in missionary work in Japan before being martyred in 1597 and was declared a saint by the Catholic Church in 1862.
Sister Alphonsa as the first woman saint  from India and the second person to become a saint from India after  St. Gonsalo Gracia . Sister Alphonsa , popularly called as Alphonsamma was declared as blessed by Pope John Paul II  along with Chavarayachan. Now the Indian Church in particular and the whole country in general especially the state of Kerala are in jubilation on the declaration of two of its prestigious children loved by most of the backward caste people without any religious discrimination, to be elevated as Saints....!
Posted by Engineers World at 2:11 AM No comments:

Kuriakose Elias Chavara  popularly known as "Chavarayachan"  was the co-founder and first Prior General of the first congregation for men in the Syro-Malabar Catholic Church, now known as the Carmelites of Mary Immaculate, and of a similar one for women, the Congregation of the Mother of Carmel..

Kuriakose Elias Chavara was born on February 10, 1805, at Kainakary, Kerala in a Saint Thomas Christian family as the son of Iko (Kuriakose) Chavara and Mariam Chothirakkunel/ Thoppil. He was baptized on February 17, 1805, at Chennamkary Parish Church in Alappuzha. In his childhood, Kuriakose attended the village school. There he studied language and elementary sciences. He entered the seminary in 1818 in Pallipuram where Father Thoma Palackal was the Rector. He was ordained a priest on 29 November 1829 at Arthunkal and presided over the Holy Qurbana for the first time at Chennamkary Church.

Kuriakose Kathanar joined with two other priests, Palackal Thoma Malpan and Porukara Thomas Kathanar to lead a monastic life. The name of the community they founded was the Servants of Mary Immaculate. The foundation for the first monastery at Mannanam was laid on May 11, 1831, by Porukara Thomas Kathanar. Palackal and Porukara Kathanars died in 1841 and 1846, respectively. On December 8, 1855, Kuriakose Kathanar and ten other priests took vows in the Carmelite tradition. He was nominated as the Prior General of the Mannanam Monastery. The congregation became affiliated as a Third Order institute of the Order of Discalced Carmelites. From that point on they used the postnominal initials of T.O.C.D
Posted by Engineers World at 12:44 PM No comments: